You probably don’t know Audrey Smith, but you ought to read the sermon preached at her funeral anyway.

Because if you have ever lost someone who meant something to you, ever hurt, ever wondered what the heck you’re here for anyway, ever asked yourself why you are weighed down with suffering and stress, you will find within these words God’s comfort and peace, His rest for your weary, downright exhausted soul. You will be given hope, the kind that doesn’t make any sense but that understands time and space and this lame-o life can’t contain the perfect love your Father has just for you.

I need to hear that Jesus’s death and life and love and grace are for me.

And I expect you do too. 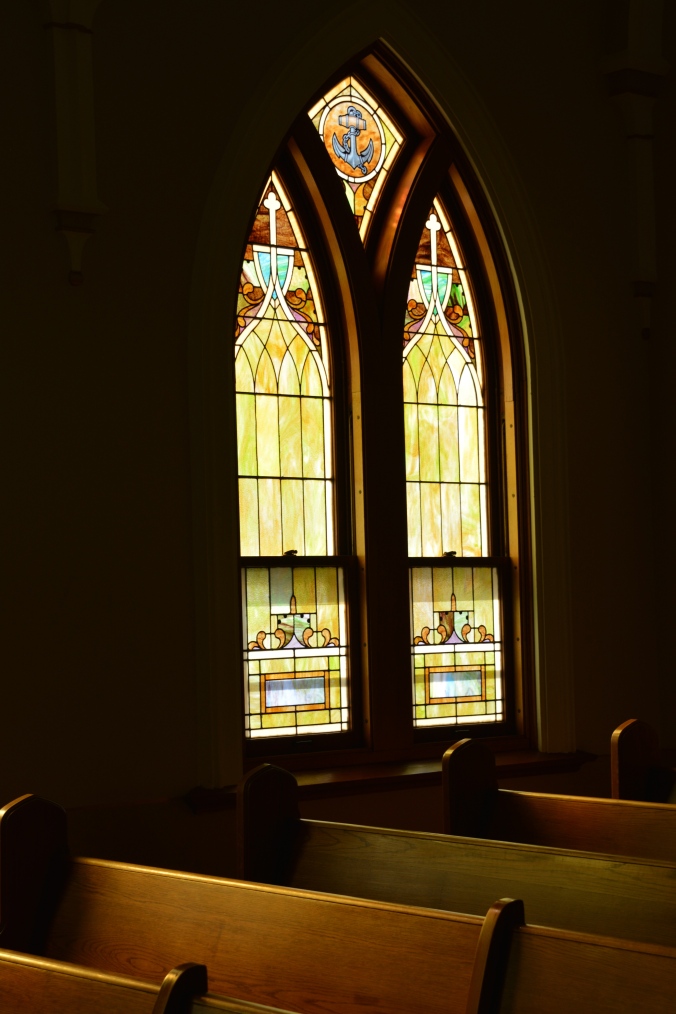 But the Lutherans think sermons should be always about Jesus.

It is the sort of thing Garrison Keillor likes to make fun of, as though it is some sort of false humility or strange, Mid-west affliction and oppression. It isn’t. It is just that Lutherans think sermons, even funeral sermons, should be about Jesus, about His suffering, death, and resurrection. The Lutherans think that no one is saved by works, that all who are saved are sinners who have found forgiveness and redemption in Jesus Christ. They think that those who mourn should not seek comfort in the good deeds of the deceased, which might prove to be less than perfect, but in the Words and Promises of Christ. They think funerals should be worship, not family reunions and triumphalist celebrations of a single life.

Now, I happen to be Lutheran. And I’ve buried some very good people, incredibly pious, devout, inspiring people. But I have never before been more tempted to eulogize, to sing the praises of the deceased, than I am today. Of all the people I’ve served, no one has ever been more like the sheep in the parable than Audrey. Her service to our members was simply incredible. I visited all the people she visited, and more, but I got to paid to do it. It was my duty. I don’t mean to say that there isn’t joy in it for me, but her service was more pure. There is no doubt about that. I am often motivated by the Law. I don’t want to disappoint the elders. I fear punishment. I often do what I must do because it is my duty. But Audrey was moved by pure compassion and without any recognition or praise. When I tried to thank her for this, she acted exactly like the sheep in the parable, even to the point of almost denying that she’d done anything. It is not that I wish we had more members like her, though I do, but it is that I wish I was more like her. 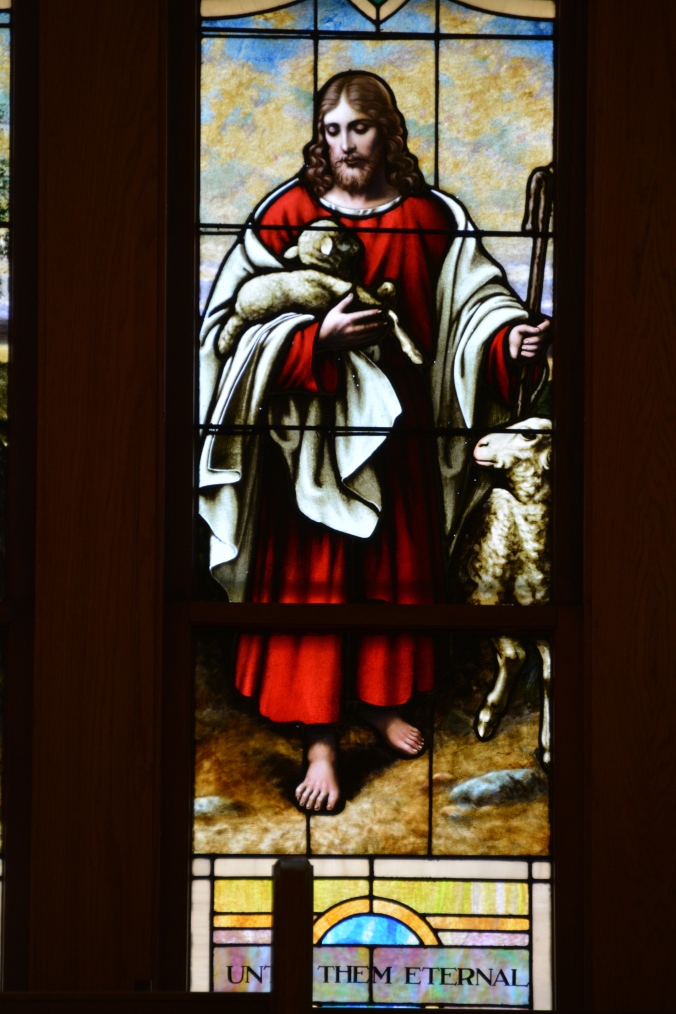 But she didn’t want a eulogy. She was quite insistent that she was a Lutheran. She told me once that at her funeral, I was to tell the people about Jesus, and not about her. She wanted to be sure they heard what she believed, where her hope and confidence were. She also told the Kantor that we were to sing only Lutheran hymns.

In her memory and honor, because she would want us to, and because it is good for us, let us consider the parable of the goats and sheep told by Our Lord in St. Matthew’s Gospel.

The sheep are shocked that they get credit for the good works of Jesus Christ. The goats are shocked also. They thought they had done enough. Both groups protest.

The goats insist on their own works. They ask: “When did we fail? When did we not help you? Look at our works, at our acts of mercy, and judge us by them.” As they ask, so they receive. They are judged by their deeds. And as good, as generous, and as  kind as their works may have been, whether they built libraries, hospitals, orphanages and gave all their lives to serve their neighbors or not, they still fall short. For all have sinned and fallen short of the glory of God. Every person’s conscience now accuses, now defends him, and everyone’s conscience therefore demonstrates his or her conflicted and troubled state, that is, each person’s conscience shows his or her inability to keep even his or her own ideals, let alone the perfect Law of God.

Yet the Lord God has used you for good. He has provided for the world through your hands and sacrifices. In His mercy, God has caused you to will and to do His good pleasure. You are a conflicted man, a saint of God by grace, washed clean with water and Spirit in Holy Baptism, clinging to the Word of Life as it has been delivered to you, and at the same time a man still fighting with sin, afflicted by temptation, besought with doubt, worry, and fear, who thinks too often and too much of himself, and what others think of him.

Turn. Turn from your deeds and works. Turn and look to Christ, the Good Shepherd and Savior of your soul. He is good. His mercy endures forever. Be judged not by your works and deeds, which on their own always fail, but be judged by His perfect life, His keeping of the Law, His satisfaction of wrath and judgment in His death, and His victory over Hell in His resurrection. His love for God and for neighbor is perfect. And what He has done for you, and for all of humanity, what He has done for His Father, counts for you, as your work and faith.

He takes what is yours: sin, death, guilt, and shame, and in exchange for all of that He gives you what is His: innocence, righteousness, holiness, and the inheritance of heaven. Face the Law and all that Justice asks in the Holy Cross of Jesus Christ. Trust in His mercy and be not afraid.

That is why the sheep have no recollection of their good deeds. It is also why Audrey protested. For when did they see Jesus hungry and feed Him, or thirsty and give Him drink? When did they see Him and help in any way at all? When they did it to one of the least of His brothers? But when was that? When they dropped a dollar in the bucket? Or felt sad for a minute when they thought of starving children in Africa? To some degree, yes, but more significantly, they did it, when Jesus did it for them. Jesus provided meat and drink for His brothers in the dessert with manna, quail, and fresh water. Jesus clothed Adam and Eve in the garden. Jesus welcomed Zacchaeus and Matthew and Peter and John, visited Paul in prison, and healed the sick. Jesus performed every good work and transferred the credit to your account and to Audrey’s account. He did it all for His Bride, to present Her immaculate and radiant to His Father, to show the devil and all the demons the power of Love to redeem and save, to have Her for Himself for all eternity and keep Her safe in His doting affection and faithfulness.

Come, beloved of the Father. Receive the Kingdom prepared for you from the foundation of the world.

That was Audrey’s firm conviction and hope. Her works were most impressive, if not completely perfect, but she wasn’t a saint by her works. She was and is a saint, a holy one of God, by grace. And the first grace is awareness of sins and the need for forgiveness. She had that aplenty. And the second grace is the peace that passes all understanding, the bestowal of Christ’s righteousness and acceptance by the Father. She had that as well. The final grace is transfer to the Church triumphant, to release from this vale of tears and the pull of temptations. She is now at rest in the house of her fathers, home at last, where she awaits the Last Day, the resurrection of the body, and the glorious reunion of the saints in heaven. May God, in His mercy, deliver us all to the same fate.

One thought on “saints by grace”