This weekend, thousands of smiling angels and worried lambs and not a few crabby shepherds will take part in their church’s annual Christmas pageant. Little Mary will hold a Cabbage Patch Jesus that appears to be smothering, and a handful of Wise Men will take private pride in being one of the three chosen ones while outwardly mumbling in nothing short of lackluster tones, “We’ve seen His star in the East and havecometoworshipHim.”

Parents, I am asking you not to wreck this year’s Christmas pageant by letting your children into church with chewing gum.

There. I said it. It’s out there. There’s no going back.

Just say no to Wrigley’s.

All of them. Don’t let your children go up in front of church with gum. That’s all there is to it.

When I was a little girl on Christmas Eve–wearing an itchy, homemade dress that matched my older sisters’ dresses–and climbing out of our blue Dodge minivan to head up the stairs to our country church in small town Iowa, my dad always had one reminder: “Spit out your gum.”

One Christmas he even said, as I walked toward the door, “If I see gum in your mouth up there . . .”

I mean, don’t we look like we are just DYING to go to the Christmas Eve pageant? No. Seriously. I think my sisters are legitimately dying. Just to be clear, I am the adorable cherub on the right.

Lest my dad sound like the Grinch, he really just had expectations of us.

Like, that we wouldn’t be gnawing on rubbery gum in the middle of what should be at least a somewhat pious event: the retelling of our SAVIOR’S BIRTH.

That people wouldn’t be so in shock over how loudly we could pop our jaws chewing gum that they’d forget the Bible truths they were hearing.

That the focus wouldn’t be on us looking like my Great Pyrenees when she’s chowing down on a hunk of fat jammed in her jowls, but that we would instead be reverent in God’s house.

His words stuck. No pun intended.

It happened the year that I was Head Angel Number 1. I had a long recitation. I even got to make it while standing on a step ladder (as I weren’t tall enough already). And to make matters even cooler, a gold star with twinkling lights zipped in on an invisible wire in the middle of my dramatic recounting and perched behind my noggin.

There I was, sitting in the pew, singing along, waiting for my teacher to give our row the signal to go up front. She motioned. I stood. I froze. I HAD GUM IN MY MOUTH. If I took one more step, I was certain my dad would see me, walk to the front of the church and physically remove me–and my wad of gum–from the premises. (And I actually semi believe he would have. Hi, Dad. Also, I love you.) 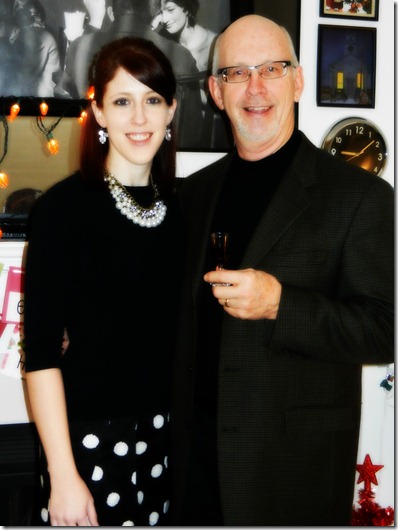 Dad and I on a more recent Christmas Eve–gumless . . . but not wine-less.

I had two options: I had to swallow that stick of gum or find a way to tuck it under my tongue for the duration of my Broadway-esque moment.

So I did neither. And if anybody wants to go look under the third or fourth pew on the north side of the church, you’ll probably find a wad of chewing gum still safely lodged there.

Here’s the bigger picture: Christmas pageants can very easily turn into the equivalents of ballet recitals and FFA shows, which is to say that the focus can quickly change from Christ incarnating Himself to little Adriane spouting off memorized lines with white lights flashing behind her frizzy hair.

We don’t need, on top of that, the focus to be on our children chomping on gum like they are cows chewing their cud.

And I have seen a fair amount of cud-chewing in my day, people, let me tell you.

Remember that line from Miss Congeniality, when she’s eating a steak, and her coach says to her, “I’m sorry, what was the question? I was distracted by the half–masticated cow rolling around in your wide-open trap.”

Our children cannot be Miss Congeniality.

This Christmas Eve, let’s agree to opt for mints. Leave the bubblegum at home . . . for your kiddos and for you.

And instead, let’s let the focus be–not on son’s shepherd’s staff and the way he’s poking his sheep in the kneecaps . . . even if it the sheep IS his little brother–but on Jesus.

The Trident can wait. 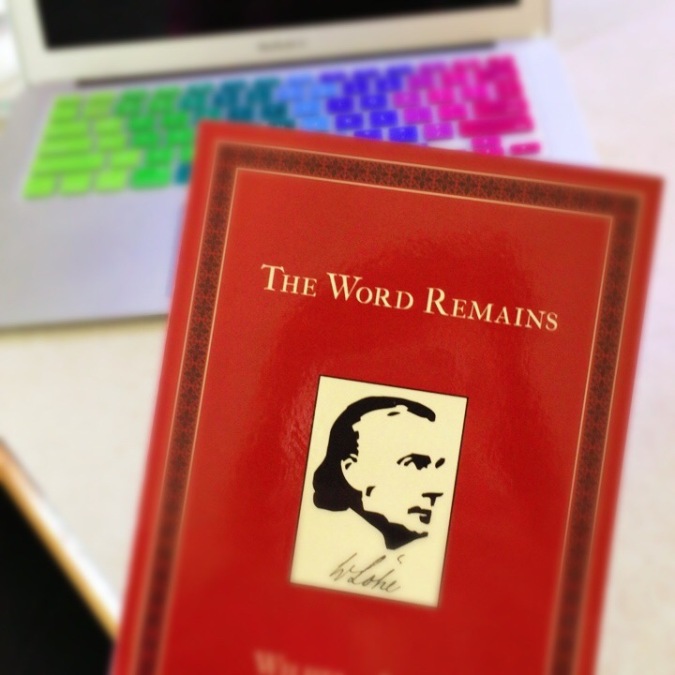 As an editor, one of my big complaints about writing today is that . . . it stinks. People don’t care about grammar. Their sentences run on and on and on and on.

They stick, not to two or three key points, but attempt to cram 18 ideas into a 350-word piece. They write for themselves and not for the edification or understanding of the reader.

Not the man whose writings on the Church Year and the life of the Christian comprise The Word Remains.

In this translated piece published by Emmanuel Press, Lohe writes for the person in the pew, the one worn down by work and life, by sin and fear, by death and general exhaustion.

And maybe even presidential elections.

That’s the sign of a good writer, after all: one who can share truth in an understandable way regardless of time or circumstances.

He brings the comfort of Christmas, of Epiphany, of the Reformation — all Christ, of course — to life.

He also touches briefly on a variety of other topics that affect the person holding the book both then and today, outlining everything from worship to work in short, clear blurbs.

This combination of longer Church Year pieces and succinct Christian life issues offers a comforting read . . . and not just once or quickly.

The introduction to The Word Remains hints at this before you’ve even gotten to the meat of the book. And after you turn the last page, you’ll realize the it was right.

There are two kinds of reading: lingering reading and consuming reading. . . . The former, the careful and contemplative reading, which satisfies itself in just a few pages per day, is what we ought to take up again, apply and practice. This is how we get back to Wilhelm Lohe, and this is how his writings should be read.

As you turn the pages of Lohe’s work, renewed by his encouraging words that return you again and again to Christ and His mercy, you’ll linger, not because the introduction tells you to, but because you can’t help but be comforted by doing so.

Lohe offered more than just his writing to the 19th-century church: his work with deaconesses and motherhouses, his insight on worship and mission.

And in The Word Remains, he gives us still more today.

Ever the pastor, he encourages us to “Trust His word. Do not stray from it. All else may be lost to you; all else may go as it will. His promise will never fail you.”

He reminds us that “The Word remains to the end. Let us look to the Word, be united in the Word!”

He heartens us that “God’s Word is revealed faithfulness and mercy.”

On every page, in every paragraph, with every sentence, Lohe–“briefly and reverently” as he would say–sets aside all our worries and sadnesses and stresses. And in their place, he comforts with the words and truths of the Triune God who overflows with compassion and mercy.

The Word Remains . . . and hopefully so will Lohe

It’s not a long read–only 140 pages–but it is one you’ll peruse again and again as sin, death and the devil throw their worst your way.

You won’t pick it up again just because the writing is good or because your needs are at the forefront.

You’ll underline and bookmark pages because Lohe’s purpose and writing are clear throughout, reminding you with every word that “All the saints, whom the Lord wins and eternally saves, win and are won; and for us also, after hard tribulations, comes the joy of eternal success. Therefore let us not grow weary!”

As a Christmas present or a treat-yourself read, allow yourself to, as the introduction says, read it  “lingeringly and with listening hearts,” because as Lohe knew and as you do too, The Word Remains.

{Read more about the book here: The Word Remains. And order some Christmas cards too while you’re at it!}

Ask a Gen Xer or a Baby Boomer what he thinks of a Millennial—a person born between 1984 and 2002—and the response is usually the same: Coddled by their parents. Slow to adulthood. Avoiders of conflict. At ease with racial, ethnic and sexual diversity. Quick to cut ties with the Church after leaving home. The response from the Millennial isn’t much better: “Yeah. So?” END_OF_DOCUMENT_TOKEN_TO_BE_REPLACED