Unless you’ve been on vacation, away from the Interwebs, living under a rock, or live in the North Dakotan hinterlands, you’ve heard that the new production of the film “Walther” is in the mail.

To every church and school in the LCMS.

Only the best for the Lutherans!

When the staff of Concordia Seminary, St. Louis, started filming last year, they were gracious enough to invite me along for a day to watch and observe how the magic happens.

My cousin, Jason Momoa, plays Conan in the new movie aptly named (wait for it), “Conan.”

I’m not saying that ripped barbarians make for bad movies (They do. They definitely do.), but if you have a choice between primal grunts and theological and historical treatises, leave the wet hair flipping and sword-wielding to somebody else.

Dale Ward, John Klinger, and their staff got right to work in Frohna, Mo., home of Saxon Lutheran Memorial.

Watching them film was intriguing.

Especially when, somewhere in the distance, a truck would start backing up right in the middle of one of Walther’s exposes.

Let’s just say . . . there were no beeping dump trucks in the early Missouri Synod.

The director, his staff, and the actors were fun to watch. They were happy to be there, excited to be a part of something so distinctly Lutheran, and having a robust time doing it. 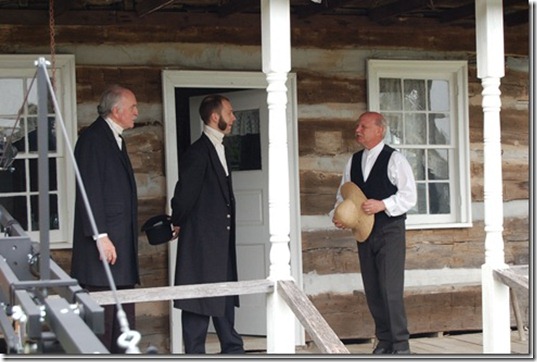 Ok, so maybe those weren’t the exact lines.

So maybe my memory is a little cloudy.

It was still awesome.

Elders: “When you say we’re supposed to be angry  church leaders, exactly how angry can we get?”

Director: “Not too angry. Last time you blew my speakers.”

Elders: “You know it. We German Lutherans know how to bring it!” 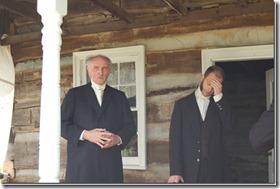 That’s a long way of saying that in case you just can’t wait until October and the commemoration of the 200th anniversary of Walther’s birth to learn more about Walther, you can go here to get your fix in the meantime.

And if you haven’t heard your pastor talking up this movie, ask him about it. Set up a movie night at your church for families to view it together. Order pizza. Eat popcorn. Revel in your Lutheranness. Rejoice in your orthodox heritage. It’s worth it.