I came to a few revelations in the past year. Some dealt with world peace, others with the government’s intrusion on the church. But mostly I just realized that my parents broke all manor of child labor laws when it came to me.

It wasn’t the bean walking. (Although that is sort of like a midwestern girl’s rite of passage. )

It wasn’t the hours of endless mowing, driving back and forth over gigantic spans of lawn in the summer heat. (Or my oldest sister setting the lawn mower engine on fire a time or two.)

It wasn’t making us hold a gate open while 300 pound hogs charged us. (Charged can sometimes be defined as sniffed or glanced briefly in our general direction, right?)

It wasn’t having to shovel the sidewalk or chip ice out of my pet rabbits’ water dishes in -50 degree weather in the middle of winter.

And it wasn’t even when Dad made us cry by teaching us how to drive stickshift. (“We are not going home until you can accelerate this car without giving me whiplash!”)

Or when we were told to stop sniveling and get on the tractor.

Or when we were on vacation, Mom with camera in hand, and the last words we heard were, “Stop whining, and stand next to that bear!”

All of those pale in comparison to this: When I was little, my parents signed me up to be a member of AWANA (Approved Workmen Are Not Ashamed), held at the local E-Free church.

There were perks to being a member of an AWANA club: uncomfortable Boy Scout-like uniforms with badges, a propensity for games that involved spinning and then running (those almost always end well), and the best of all: pop.

(That’s soda for the rest of you.)

In our club, learning ten Bible verses by heart earned a child a can of pop.

Basically, if there were ever an incentive to learn Scripture, those AWANA leaders had found it.

I didn’t realize until a few years ago why my mom hounded me so much on my memorization of the Bible. But I get it now! I learned 800 Bible verses. And although I cheated my way through math, I think we can all agree that’s a lot of Coke.

Then I promptly forgot 798 of the verses.

Still, in the Dorr household, you were only allowed to drink pop with meals that involved tacos,  nachos or pizza.  We were a pop-less family. We were so pop-less we didn’t even know what root beer was. We didn’t even get pop at McDonalds. (Namely because we never ate there, but you see where we’re headed here.) 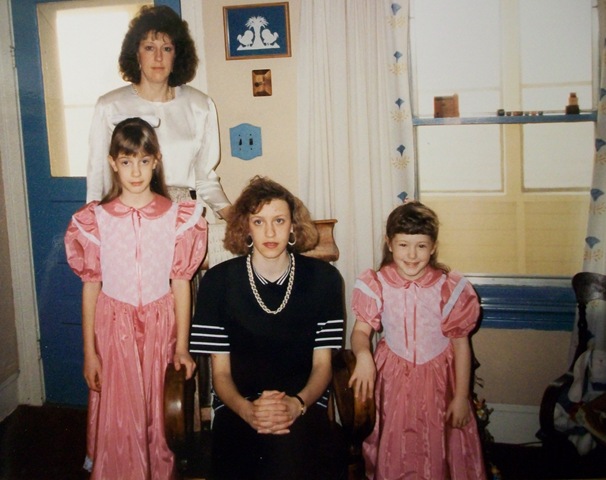 Can you pick out the little girl excited about getting some pop? It’s not the three oldest gals in this picture, I can tell you that. THEY look like they just got released from a Russian gulag.

I’m old enough now. If you only loved me because I padded your grocery budget, I need to know.

If you only pretended to desire the holy things of God for me so that you could down nachos and swill Mr. Pibb after I was in bed, it’s time you tell me.

Or if there’s a secret stash of fizzless cans of Mt. Dew still out there, we should probably talk about that too.

It’s time I got some answers.

One thought on “i’m just asking”