Someone asked me not too long ago if I wrote about cohabitation in my soon-to-be published book on single-ness. I did.

Spoiler alert: I’m not a fan.

I used to think people moved in together because of sex, but that can’t be it. There have to be other reasons that people are suddenly good with sharing households but not last names.

Maybe it’s because people don’t even know the good stuff when they see it. Living together outside of marriage is like ordering a Big Mac, but then deciding you want it without the special sauce, cheese, and pickles. Hello! Those are the very things that make a Big Mac a Big Mac.

Maybe it’s because people are lazy. Learning to respect your husband and love your wife–no matter what–demands willpower and discipline. Promising before your heavenly Father to devote yourself fully to another person is hard work.

Maybe it’s because people are greedy. Living together outside of marriage isn’t just for struggling artists anymore. Now our parents and grandparents are doing it too. If they get married, they lose insurance or benefits. It’s not  about love. It’s about money.

Maybe it’s because they actually don’t want their relationship to thrive. Research tells us that couples who live together outside of marriage more than double their chances of getting a divorce. That means fifty to eighty percent of cohabitating couples who get married end up divorcing. So I have to wonder if, knowing the stats, these couples actually want their relationship to work out in the first place.

Maybe it’s because the Church is often scared to speak. When was the last time we, as Christians, had the courage to say, “I care about you, Jack and Jill. I want the two of you to live a long, blessed life together. And that’s why I don’t want you to be on the receiving end of God’s anger by living together outside of marriage, no matter what the reason is”?

I’m chief of sinners. I’ve never expressed that kind of concern to a couple living together outside of the order God intended for them. But this is the year I pray God gives me the strength to.  Because these people matter. And their salvation matters. 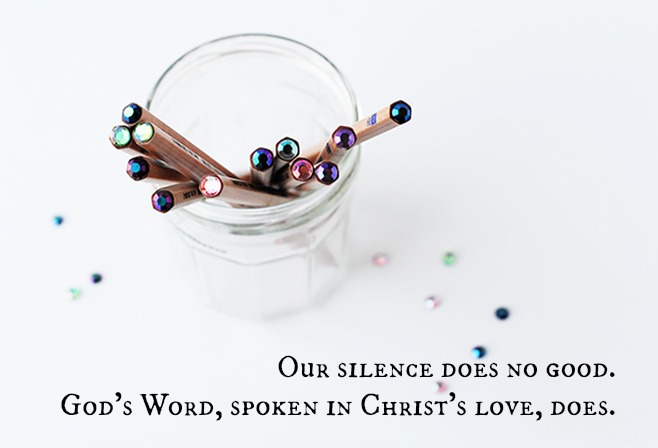 So, let’s be bold. This year, as Christians, let’s talk about the joys of marriage. No more saying to singles,  “Well, enjoy your time as a single, because once you get married, it’s all over!” Instead, let’s be purposeful in reminding one another that, with prayer and forgiveness and God’s blessing, marriage is the most fulfilling relationship a person can ever know.

Tell people! Rejoice in your husband or wife! High five your spouse!

Because marriage really is one of God’s kindest and most contenting gifts.

Let’s speak up when people say, “Oh, everybody’s doing it.” There’s 313 million people in America. 7.5 million are living together. I’m not great at math, but I’m pretty sure we can infer from those facts that everybody’s NOT doing it.

Let’s encourage our pastors. Ask him to teach you and your congregation about why living together outside of marriage is so dangerous to the couple, how it breaks families and congregations and friends apart, how it incurs the very wrath of God on that couple (see Romans 1:18ff).  Ask him to preach to the married and the single. Encourage him to work through John 4 with you.

{Because if ever there was proof that the Lord pays attention to the living habits of His people, Jesus’s words, “For you have had five husbands, and the one you now have is not your husband” is it.}

Let’s pray. The Lord is merciful, and He promises to hear and answer the pray of each one of us sinners–whether we are sinning sexually, financially, theologically, verbally. His heart is moved by the prayers of the faithful. His forgiveness is endless.  His Gospel soothes consciences. His love envelopes.

Let’s pray that it’s an opportunity for repentance, for forgiveness, for God’s grace to abound. 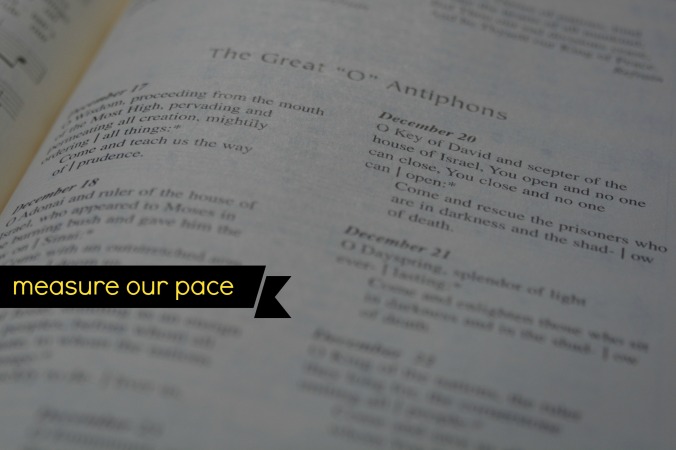 This week, you will be tempted.

You will want to give in, give up, give out.

You will endure one of the most intense situations you will ever encounter in this life.

The very fiber of your being will be tried in a Jack Bauer-esque struggle of epic proportions.

This week, you will be tempted to give in to . . . Christmas.

The day after Thanksgiving, your fingers will twitch, your ears will roar, your legs will become unsteady as you move slowly towards the attic, drawn inexplicably to the Christmas decorations stored there, sultry sirens calling your name, begging you to skip right over Advent and dive headlong into Christmas.

This week, though, you get to fight. You get to do battle with the world’s mad dash to Christmas. You get to engage in hand-to-hand combat with consumerism, Mormon mommy bloggers’ Christmas projects, and Pinterest boards of Christmasy goodness.

Instead, you get to confess Christ boldly. You get to wait. You even get to work yourself into an Advent frenzy with William Wallace-like bravado. FREEDOMMMMMMMMM!

Fight and you may die. Run and you will live at least awhile. And dying in your bed many years from now, would you be willing to trade all the days from this day to that for one chance, just one chance, to come back here as young men and tell our enemies that they may take our lives but they will never take our (Advent) freedom!

This week, you get to reclaim what is yours: the season of Advent, the Advent wreath, the waiting, the anticipation, the measured pace through the next few weeks, the looking forward.

We Lutherans ought to be good at Advent. {Heck, we’re the ones who created the Advent wreath, after all.} We don’t move quickly. We’re often quietistic. We don’t like to make up our minds too quickly.

And so, this year, let’s play to our theological strengths. Let’s wait. Let’s not be rushed. Let’s take our time. Let’s be slow and deliberate. Like salmon swimming against the culture’s current, let’s measure our pace, take a deep breath, and focus on waiting for our Lord.

The anticipation of Christmas is a picture of the Church’s faithful waiting for our Lord’s coming again. “This Jesus, who was taken up from you into heaven,” angels tell the disciples on the Mount of Ascension, “will come in the same way you saw Him go into heaven” (Acts 1:11), namely, openly, for all to see. Ever since, God’s people have been “on the lookout.” We “look for the resurrection of the dead and the life of the world to come,” all of which will take place when “He will come again with glory to judge both the living and the dead” (Nicene Creed). {Read the full article by the Rev. Dr. Herbert Mueller here.}

Let’s not tick off the days in exasperation, anxious to get to presents. Let’s go in our own way: Sundays in Advent, candles in purple and rose, days, weeks, time.

Advent is not pre-Christmas. It is not a series of mini-celebrations of Christ’s birth. But Advent is a season of hope, a season rooted in waiting for the arrival of Christ’s mercy. . . . Advent is always there to build you up by showing you the love of the Savior for whom you wait. {Read the full article by the Rev. Hans Fiene here.}

This week, eat turkey. Gorge yourself on mashed potatoes. Give thanks for our Lord’s love and mercy shown at your table on Thanksgiving and at His each Sunday. And then sit back in your recliner. Breathe. And like Mary, ponder it all in your heart: Christ’s second coming, His forgiveness for you, and Christ Himself, whose timing–slow and measured–is always, always perfect.

PS: To all the Mormon bloggers out there, ENOUGH WITH THE CHRISTMAS POSTS. IT’S NOT EVEN DECEMBER YET. Man alive.

PPS:  You can learn about my ongoing battle with The Great Advent and Christmas Struggle of 2012 here.

Rather than writing a wordy post about all the reasons I love my dad and why pretty much everyone else loves my dad too, I made a list of the advice I believe he’d give a young father. It may not be politically correct, but then again, my dad isn’t either.

Raising daughters isn’t easy. We’re emotional. We’re dramatic. We’re needy. We crave affirmation and approval. But we love our dads. Gosh, do we. And we love, even more, the dads that love us right back. 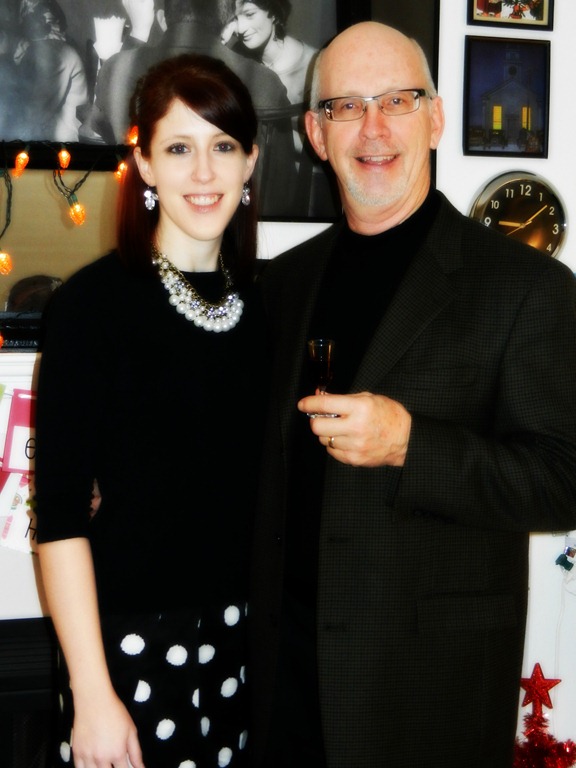