Hi. My name is Adriane, and I am addicted to Pinterest. It’s a craft/fashion/cooking/entertaining website that makes you feel like you’ve just done something brilliantly creative even though you’ve just been sitting at the computer staring at the Internet for three hours.

But it’s Pinterest, I’ll have you know, that gave me the idea for a Favorite Things party. You think of your favorite (cheap) thing, and then buy five of that same thing. At the end of the night, you share why it’s your favorite thing, swap with five other people, and leave with lots of goodies. There’s really no downside to this situation.

My mom is in town for the week so we got to work cooking, baking, and cluttering up the kitchen with impending craft projects.

I should probably see a therapist about that. 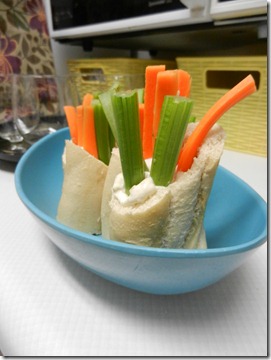 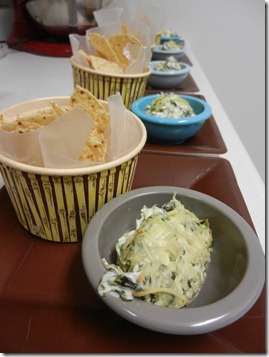 In keeping with the Favorite Things theme, I decided to make some things that aren’t actually my favorites at all, because, let’s face it, you can’t serve chicken salad, chocolate milk, and raspberry lambic at a party of dignified ladies.

Or maybe you can. They’re pretty chill.

But just to be sure, we made everything in mini. 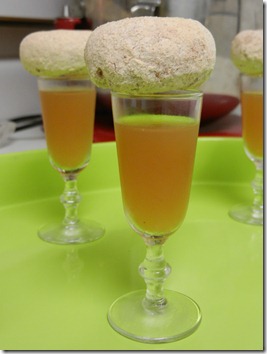 Tangential side note: Dear ladies, it has come to my attention that some Lutheran women think that, in order to be an honest-to-goodness wife or mom or lady in general, busy and frazzled is the new chic.

But as it turns out, (1) your house does not have to look like a mess, (2) you can entertain with dishes other than paper plates, (3) there are recipes that do not involve casserole ingredients, (4) entertaining people in your home does not have to be a horrendous chore where children swing from chandeliers and the dog runs off with the roast.

Now, I’m not saying it’s easy, but entertaining can actually be fun, enjoyable, classy, and quite inexpensive. And it’s a good thing, a Life Together kind of thing, if you know what I mean.

It’s also a lost art, especially for my generation, but that’s for another day.

My favorite thing? Peacock feathers. But since handing out random feathers to my guests would probably be a little odd and likely frowned upon, I decided to glue them to wreaths instead. Because that’s what you do.

So go ahead. Channel your inner Martha Stewart. Cook some food, invite some friends over, and swap stories. I know you’ve got it in you.