{Caveat: As this sectional was (a) awesome, and (b) way over my head, I present the following, which was as much as I could get down and still understand. Please see Dr. Hal Senkbeil or Dr. Bev Yahnke for more info on the lecture.}

“In addition to being biological and rational, we are moral agents. We can flourish or decline with regard to our character. It’s possible to be like Mother Theresa and Joseph Stalin, both human beings made out of the same material,” noted Dr. Robert P. George, McCormick Professor of Jurisprudence and Founder, director of the James Madison Program in American Ideals and Institutions at Princeton University, and visiting professor at Harvard Law School.

“We can take action because we see the point of being a moral person . . . we can see and grasp the point of repentance and reform and rebuilding of our character through virtuous acts. We understand that we can flourish or not flourish with regard to our moral well-being.”

George spoke this afternoon to DOXOLOGY conference attendees on the topic of “Natural Law, God and Human Dignity.” 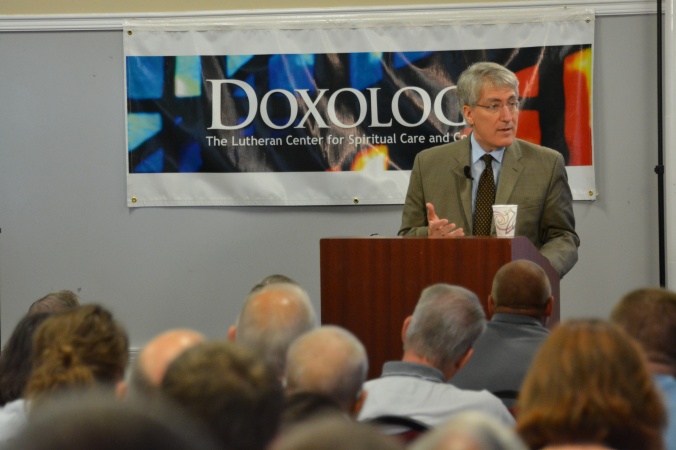 Quoting philosopher David Hume’s statement, “Reason is and ought only to be a slave of the passions and may pretend to no office but to serve and obey them,” George noted that, “Hume talked himself into believing that reason’s role in our choosing and acting is purely instrumental. He neglects to see that sometimes we have a passion for something–we want something, we desire it, it appeals to our emotions–precisely because of our reasonable/rational judgment, because it’s an intrinsic fulfillment of ourselves. Human deliberation and action are a great deal more complex than Hume’s account of our practical reason allows.”

So then, George asked, “What is lost or foregone in what is truly good? The good of the option not chosen is simply to be found in the option that is. This is why regret is possible even when we make good choices.”

History’s response to these kinds of questions has traditionally gone one of two ways: utilitarianism or natural law. The latter includes “All the familiar precepts that most people seek to live by and try to teach their children to respect, such as the Golden Rule, but utilitarianism emphasizes, the Pauline principal: that one should never do something in and of itself that is evil, that the the end doesn’t justify the means.”

These moral norms “fully specify what our obligations are in cases where we might not have chosen to put ourselves in but we find ourselves in.” Natural law “proposes a higher law by which the existing law can be judged to be unjust or just. Unjust laws lack moral authority . . . and yet there are still good reasons for conscience citizens to obey even unjust laws,” he said, referring to Martin Luther King Jr.’s letter from the Birmingham jail.

Turning to what this means with regard to theology, George said, “Like God, because of God’s gift, because of the sharing of His divine power, human beings share that God-like power. As Aquinas said, ‘The brute animals God leads to their natural purposes or ends. But human beings, He leads not only by instinct, but by reason, practical reason, a power that God Himself has: intelligence.”

“Human beings are possessors of a rational nature. That is, they come into existence with the radical (root) capacities. . . . We are distinguishable from brute animals because of them.”

George then noted how this has affected his continued dialogue with Peter Singer, also a professor at Princeton, who “argues that what makes a person a bearer of worth or dignity is the immediate exercisable capacities themselves, which is why he thinks we’re justified in abortion, even though he admits it’s the killing of a human being. He believes it’s not yet a person; it’s a pre-personal human being.”

“We have no choice intellectually but to move to the idea of spiritual realities, final causes, that are not reducible to the material,” George explained. “Were it not for God’s self-revelation in Scripture and ultimately in Christ, we would know very little. In Plato’s Dialogues, you notice that he talks interchangeably between ‘gods’ plural and God singular.  . . . When his references to divinity are passing or ceremonial, he speaks of the ‘gods’ plural. But whenever the divine is doing analytic work, he speaks of ‘God’ singular.”

“That cat,” he quipped, “got really near the idea of ethical monotheism with no access to Hebrew revelation, the idea of a personal God, a divine intelligence!”

“Faith just profoundly illuminates the human good in all of its dimensions, and it enables us to realize in a more excellent way, as St. Paul would say, to realize all the aspects of well-being and fulfillment for ourselves and others and to do so in a way that is morally upright,” George said. “I don’t think we want to say that those who lack Christian faith can understand nothing of beauty or friendship or virtue. Look at Plato or some of the great artists. . . . I think we can appreciate them more than they could themselves. I think I can appreciate Plato more from Christian faith than Plato’s disciples themselves because of the gift of faith.”